While there are a myriad of movements within the sport of CrossFit, there are sub-categories that encompass collections of movements. The 3 overarching categories within CrossFit are: gymnastics, mono-structural disciplines, and weightlifting. In this post we are going to discuss a sub-category within the weightlifting category that is often presented with a lot of “sizzle” but not a lot of “steak” : barbell cycling. Without fail, 2 minutes of scrolling through Instagram will lead to a variety of posts showcasing people lifting a barbell in some capacity. It’s fast, sexy, looks athletic, and any other adjective you want to use. As an aside, the real beauty behind the barbell is 200 pounds is always 200 pounds. The common language allows for us to comprehend what someone is doing with a barbell. But, that’s not what this post is about. We can save that for another time. Instead, with the 2021 CrossFit Open fast approaching, I want to explore this more nuanced sub-category in the sport of CrossFit. Let’s unpack it so you can start training it more effectively.

Before diving into anything with the intent of better understanding what it is and how to better utilize it we need to define exactly what we are talking about. In the context of the sport of CrossFit, and this blog post, we will define barbell cycling as the following:

This definition recognizes three presuppositions that are worth noting before jumping into the meat and potatoes of barbell cycling:

One of the problems with the label “barbell cycling” is people assume that means SPEED. Faster reps at faster rates. While there is an element of speed needed when cycling a barbell, and potentially at a faster rate, viewing it only through the lens of speed is myopic. The true measure of success when thinking of barbell cycling is sustainability. This is in large part due to the determiner of success in the sport of CrossFit being the sustainability of power. By connecting sustainability with barbell cycling we can start to better understand how to view that skill and how to improve it more effectively. In the next section we will discuss further the nuances in different rates of speed with different loading parameters for the skill of barbell cycling.

The tests within the sport will always dictate the training for that sport. This is important to remember. Ironically, the tests within the sport of CrossFit are always changing, which makes it interesting when it comes to properly training for the sport. However, there are consistent patterns, movements, pairings of movements, time domains, etc. that are repeatedly seen which makes it more feasible to improve the characteristics needed to excel in the sport.

Barbell Cycling Data Pool based on the past CrossFit Open events: 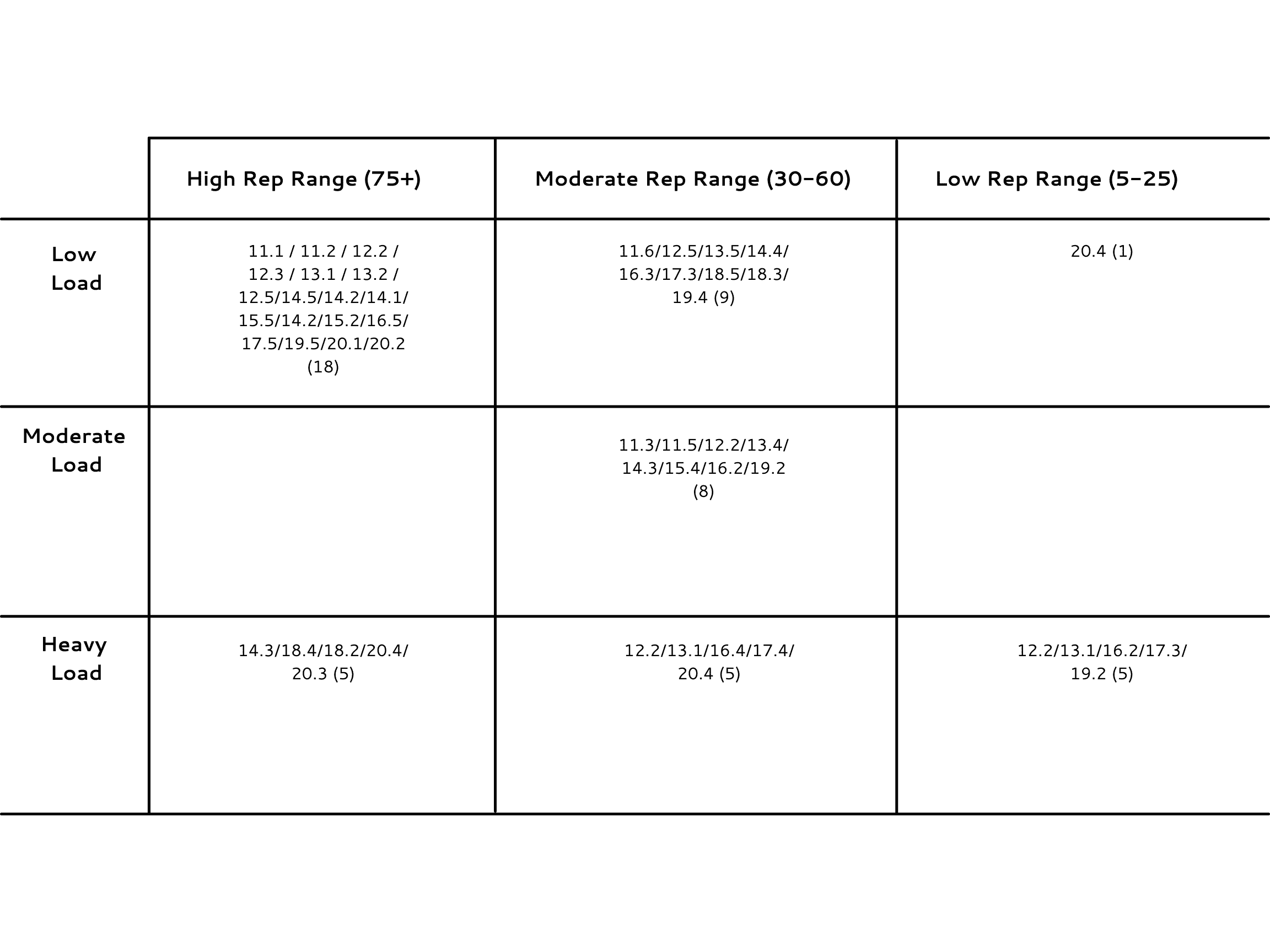 Notes from the Data Pool:

The above data pool and percentage breakdown can help create context around what type of barbell cycling one can expect from the CrossFit Open to better plan and train for it. Not surprisingly, the large majority of barbell cycling work falls into the light load with a high rep range category. Additionally, low load with a moderate rep range was second while moderate load with a moderate rep range was third. The heavier loading and lower rep ranges were seen far less often, but nonetheless important for the sport. The general takeaway, lower loading with higher repetitions is consistently seen and will be a required skill to have come competition time. Before discussing how to train this, we need to better understand the differences in loading and turnover speed which will open the door for how to properly train and progress the various pieces within barbell cycling.

Let’s take it one step further. To better understand the differences in types of barbell cycling a continuum can help illuminate the variety of contractions using the matrix listed above.

*I prefer the word turnover instead of contraction in this context as I believe it resonates more on the difference in feeling when lifting varied loads on a barbell. It’s also worth noting that turnover speed also refers to the time in which someone can lift the load again. The lighter the load the faster someone can repeat the action (this is an extremely watered down statement but it is sufficient for the context of our discussion).

As one can see, with lower loads the turnover speed will be higher due to less mass on the barbell and less neuromuscular tension needed to lift the load. As we move along the continuum an inverse relationship develops: as loading increases, the turnover speed decreases. This is in large part due to the greater neuromuscular tension needed to lift the load, and steadily approaching one’s repetition maximum with that movement. As the weight gets heavier, both absolutely and relatively, the neuromuscular demand on the body rises in order to coordinate the firing of a larger portion of motor units to lift the load. This highly coordinated contraction drains the “battery” of the nervous system whereby a rest period is needed to recharge the battery before attempting to lift the load again. This rest period will vary greatly between individuals; the reasons for this variation are outside the scope of this blog post. In layman’s terms, If you have a power clean max of 245 pounds, when you power clean a 95 pound barbell you can most likely be able to perform a touch-n-go set of 5-7 reps with that load no problem. Whereas if you had to power clean 225 pounds, you would need to strap on your belt, get a big breath/brace, then lift the bar followed by a rest period before trying to lift it again. This simple example is highlighting the change in tension placed on the body as the loading increases which directly impacts the turnover speed and total repetitions someone is able to perform.

There are specific prerequisites you must have before training barbell cycling. Knowing what a snatch and clean and jerk are doesn’t grant someone entry into the training and progression of barbell cycling. Knowing what a handstand is and how to do a summersault doesn’t grant someone access to higher level variations of those movements. There are steps along the way that must be accomplished before reaching the “fancier” aspects of a skill. Paradoxically, the lighter the loading being used in barbell cycling training the stronger someone must be to perform, recover, and adapt to that stimulus effectively.

Earlier I mentioned, “The tests within the sport will always dictate the training for that sport” this also applies to how we program the volume of the work within the training design. The competition creates the framework for functional volume. Last year I wrote a blog post discussing functional volume more in depth. You can read that post by clicking here. In that post, I define functional volume as “the requisite amount of repetitions an athlete in the sport of fitness (CrossFit) needs to build towards within their training design to match the relatively consistent amount of repetitions required to complete in online qualifiers, Sanctional events, and other various competitions.” For example, year after year there is usually an event in the CrossFit Open that has between 30-40 muscle ups. That would mean the functional volume required for a muscle up is 30-40+ repetitions. From a skill progression standpoint, you would first need to be able to do those 30-40 reps alone in a relatively lower fatigue setting before moving those 30-40 reps into a milder fatigue setting before finally moving them into a setting comparable to the CrossFit Open where fatigue is high and there are additional movements that negatively impact your ability to do muscle ups also known as non-complementary movements (this is a very condensed explanation of skill progression).

When it comes to functional volume for barbell cycling, we have a wide range due to the wide range in loading. As I mentioned above in my data pool from the past CrossFit Opens, we see anywhere from 5-150 repetitions with a barbell in a given workout. It’s worth mentioning again, the repetition amount will always be relative to the loading. For example, the CrossFit Open won’t make a test that has 100 squat cleans at 315 pounds; Instead, they are more likely to make a test that has 100 squat cleans at 135 pounds. So, when it comes to program design, the skill of barbell cycling has to move towards these functional volume numbers, by themselves, before being integrated with other movements, before finally being put into a test scenario where fatigue, efficiency, muscle endurance, etc. are fully tested.

Using the data pool numbers we can layout the volume requirements for given loads:

Now that we know what the intent of barbell cycling is, how it is applied in the sport, the prerequisites required in order to develop it, and the volume targets relative to its sport application we can now discuss how to design it in training.

Before we get into it, we need to run through skill progression. As I mentioned earlier, barbell cycling is a skill which means it needs to move through the necessary steps in order to advance the skill at the proper rate otherwise we risk creating compensatory movement patterns and limiting our ceiling of performance.

Now, using the above skill progression model, let’s plug in a barbell cycling movement to show progression of it through program design. We are going to progress this movement from the beginning stages of skill progression all the way to testing it. We are assuming all prerequisites have been met before implementing this progression.

Through this progression we took the power snatch at competition standard loading and moved it from a controlled setting by itself, built volume, added additional movements and challenge, added fatigue, and added constraints by forcing strategic break ups to force the athlete to practice transitioning from touch-n-go reps into singles. This all culminated with a test where barbell cycling capabilities were challenged, the 2020 CrossFit Open workout 20.1. The beautiful part of this sport is ALL skills need to move through this progression model for them to be optimally expressed at the highest level. Some people will be further along the skill progression model with certain skills while others will need more work. As an example, someone could be proficient with power cleans and cycling lighter to moderate loads well but struggles with snatch variations due to the added range of motion and limitations in their shoulder mobility. This becomes an opportunity to work on a few pieces: mobility specific work around the shoulder and skill progression of snatches in a cycling based environment.

When we can clearly define what something is we can more easily break down how to improve it. Barbell cycling is a skill that is required in the sport of CrossFit that has required prerequisites in order to progress the skill appropriately. Take the time to build the base of support needed before embarking on barbell cycling work. It might take more time initially, but the long term gain will be far greater than the short term loss.

Check out the videos of Coach Sam walking through tips of barbell cycling for various movements: 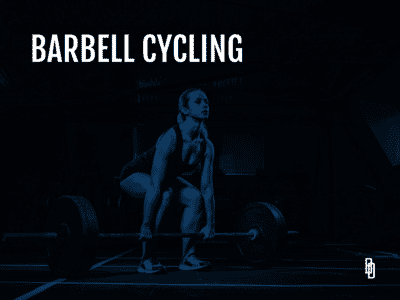