How strong do you need to be in CrossFit?

If there’s one topic that drives up quite a bit of conversation in the competitive Crossfit world it’s strength metrics. This discussion usually moves in the direction of how strong do you need to be in order to compete. Due to technology and a large data set of competitors, we can accurately outline what those values are to create clearer context around what is required in order to compete at a particular level in the sport. Before we get into the raw numbers, it’s important to discuss a few topics to help create a better understanding around strength and how to properly balance strength to keep injuries at bay while ensuring effort is being put into the proper buckets within the training design.

In the sport of powerlifting and weightlifting the overarching aim for the athlete is to get as strong as they can in their respective weight classes. The performance, and scoring, in their sports are solely dictated by how much weight they can lift. Thus, their training plan is structured around the pursuit towards maximal physical strength potential. When we compare that to the sport of Crossfit, the performance and scoring in the sport are not solely dictated by how much weight someone can lift. On the contrary, the sport of Crossfit creates tests that challenge a myriad of physical attributes. To give two examples: 1) How much work someone can do in a fixed amount of time with a fixed number of movements and repetitions per movement; 2) How fast someone can lift a fixed amount of weight in a given time window. This diversion from the classical strength sports leads to the requirement of a large breadth of skills, strength in various forms, and capacity in order to perform and place well in the sport.

While strength isn’t valued as highly as it is in the classical strength sports, one’s strength creates the foundation, or lack thereof, for all of the skills needed in order to do well in the sport. This distinction of strength is important to make; one becomes the aim, classical strength sports, while the other becomes a supporting piece, Crossfit. If it was the case that strength was the sole determiner for success then the strongest Crossfit athletes would be the best Crossfit athletes, but this is not the case. The most balanced Crossfit athletes are the best Crossfit athletes. That balance implies a requisite amount of strength to compete at the highest level but not an excessive amount due to deleterious effects of being too strong in an pseudo-endurance sport. In the words that follow, I will aim to illuminate what strength numbers correlate with adequate strength levels in order to gain admission to compete in a given level within the sport of Crossfit. By doing so, people can then lean on hard numbers to create truth behind what they actually need to be able to lift versus what they think they need to lift. Then, the training focus can be more evenly distributed amongst the other attributes required in order to climb the ladder of competency in the sport.

When we look at strength metrics, it’s important to discuss the concept of “structural balance.” This concept has been around for quite some time and to my knowledge was popularized by the late strength coach, Charles Poliquin. The idea behind structural balance is to compare strength metrics against each other in order to analyze balance, or lack thereof, of strength across opposing, and complementary, joint angles. This analysis can allow someone to monitor potential weak points in someone’s strength profile whereby injuries can be kept at bay along with strength adaptation being further pushed. Below is a breakdown of the percent distribution for optimal structural balance across the major lifts.

*Worth noting, female %’s can be higher across the board due to biological differences and other systemic factors

Now that we understand strength, it’s role in the sport of Crossfit, structural balance, the percentages required in order to have great balance across multiple joints and movement patterns, let’s get into the specific metrics I’ve developed in order for someone to have the requisite strength required to compete at a particular level in the sport of Crossfit. I’ve created 3 categories: Open, Semi-Final/Sanctionals, Games. These represent a rough outline of the major jumps in competitive ability within the sport. How I approached the collection of this data was through the lens of the squat snatch. Based off of empirical data, the Crossfit leaderboard, colleagues, and discussion with others I came to the agreement that having a squat snatch maximum of 155 pounds for a female and 225 pounds for a male were strong values in order for someone to compete in the Crossfit Open and be deemed a “Crossfit Open Athlete.” From there, I utilized structural balance percentages to layout the corresponding values required in the other main lifts to support a squat snatch maximum at  that weight. This led to the table you will see below.

Additionally, I wanted to create a similar box of metrics for the following levels in the competitive ladder, the Semi-Final/Sanctionals and the Games. Using the same methods of data collection I used for the Open level I came to the values you will see below. 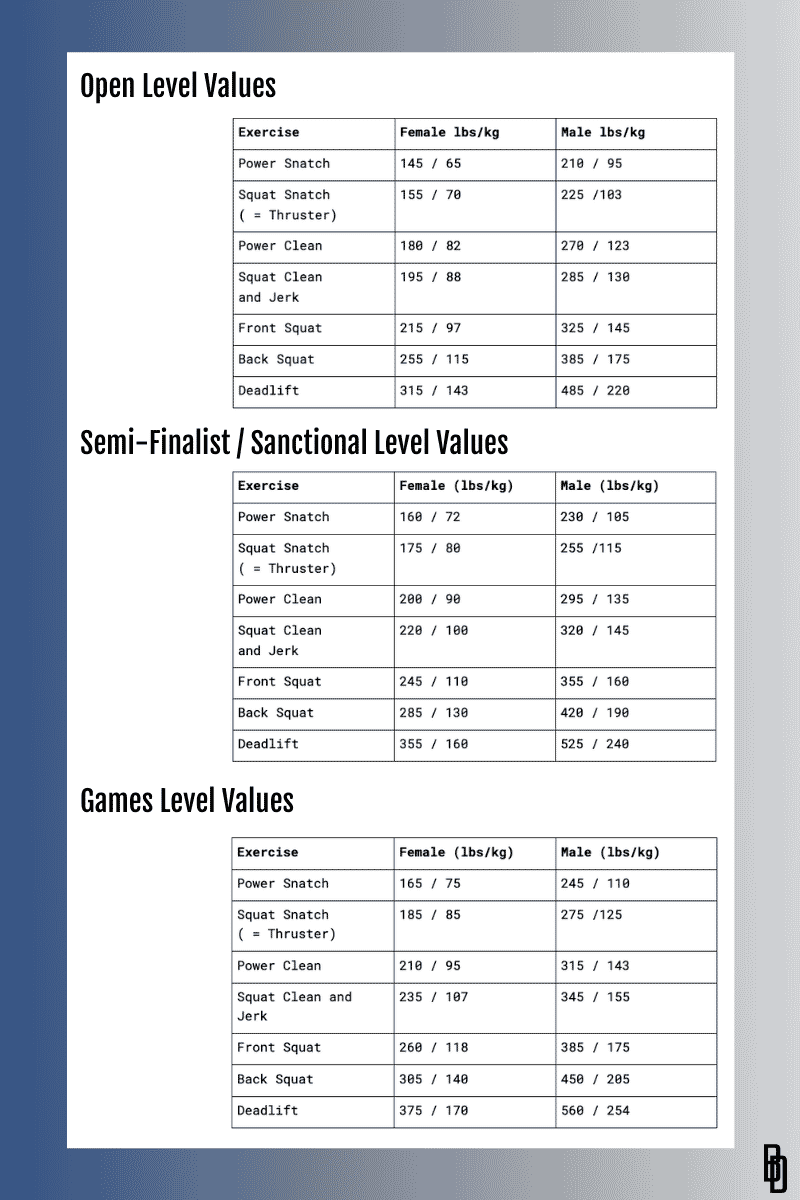 To add more legitimacy to these values, I analyzed the top 10 athletes’ snatch and clean and jerk values from this past year’s Crossfit Games and compared them to the values listed above. Even though these are the top 10 in the sport, my above values hold water fairly well.

Max values for: Snatch / Clean and Jerk (in pounds)

Strength is foundational. It is the base of support needed to express higher levels of skill and metabolic work. However, we can’t lose sight that strength is not the “end all be all” for success in the sport of Crossfit. There are barrier to entry strength metrics we want to aim for in order to be adequately prepared for the tasks that one can expect at the various stages within the sport of Crossfit. Once those values are reached, it would be wise to begin raising other attributes in order to bring up all systems moving one closer to their maximum physical potential.

READY TO START WORKING WITH A CRAFTED COACH TODAY AND SEE RESULTS! 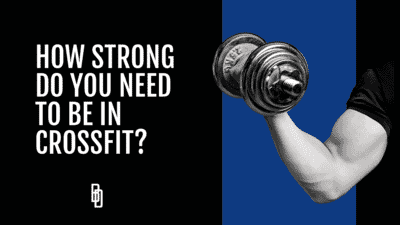